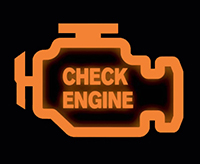 When your car’s “Check Engine” light comes on, it’s usually accompanied by a sinking feeling in the pit of your stomach. The light could mean a costly problem, like a bad catalytic converter, or it could be something minor, like a loose gas cap. But in many cases, it means at minimum that you’ll be visiting the car dealer to locate the malfunction and get the light turned off.

The Check Engine light — more formally known as the Malfunction Indicator Lamp (MIL) — is a signal from the car’s engine computer that something is wrong. The car dealer’s service department can diagnose the problem for about $75. But there’s a way to preview what the problem might be.

Prior to 1996, carmakers had their own engine diagnostic systems, primarily to ensure their cars were compliant with Environmental Protection Agency pollution-control requirements. Starting with model-year 1996, automakers standardized their systems under a protocol called OBD-II, which stipulated a standardized list of diagnostic trouble codes (DTC) and mandated that all cars provide a universal connector to access this information. It’s usually located under the steering column and is easy to access.

Deciphering the Code
Do-it-yourselfers can buy inexpensive code readers that connect to this standardized onboard diagnostics (OBD) port and search for the code’s meaning on Web sites such as Engine Light Help. The Check Engine light can even be turned off by some code readers, even though this action alone does not actually repair the underlying problem. In many such cases the light will simply come back on later.

Check Engine lights come in orange, yellow or amber, depending on the manufacturer. If the light begins flashing, however, it indicates a more serious problem, such as a misfire that can quickly overheat the catalytic converter. These emissions devices operate at high temperatures to cut emissions, but can pose a fire hazard if faulty.

Don’t Ignore That Light
So if the Check Engine light comes on and it’s steady rather than flashing, what do you do? The most obvious answer, of course, is to get the engine checked. But many people do nothing, perhaps fearing an expensive repair bill. Some drivers with older cars want to squeeze out as many remaining miles as possible without visiting a service garage. But before they can pass their state’s vehicle inspection, they have to get the light turned off. And a state inspection is a good motivator for dealing with the problem. If the light is lit, there’s a good chance the car is
releasing excess pollutants or consuming too much gas.

Ten percent of all cars on the road have a Check Engine light on, and the drivers of half of these cars have ignored the light for more than three months, says Kristin Brocoff, a spokesperson for CarMD.com. The company sells a $119 device that reads engine codes and provides access to a Web site database that identifies the problem (according to the code) and estimates the cost of repair.

CarMD isn’t alone in the code-reader market. An Internet search will bring up countless devices, some costing as little as $40. Most come with a booklet listing the codes, but it is also easy to do a Google search to locate the codes. Aamco will check the Check Engine light for free and provides a fact sheet.

As Dan Edmunds, director of vehicle testing for Edmunds.com, points out, the system is primarily designed to continuously monitor a car’s emissions system over the life of the car. However, he notes, “The engine and the emission control system are so interlinked that the health of the emission control system is a good indication of the general health of the car’s engine.”

Steve Mazor, the Auto Club of Southern California’s chief automotive engineer, says that while some people freak out when they see the Check Engine light, “others just put a piece of black tape over it and keep driving.” Mazor says it’s important to promptly address problems indicated by the light. Ignoring them could lead to larger, more costly problems later.

If the light comes on, Mazor says the driver should first see if the gas cap is loose: That’s a common cause. A loose cap sends an error message to the car’s computer, reporting a leak in the vapor recovery system, which is one aspect of a car’s emissions system. If the gas cap is
loose, tighten it and continue driving. Even so, it will take some time for the light to go off, he says.

Mazor says that even an inexpensive code reader could be useful for car owners, even if theyaren’t mechanically inclined.
“If the mechanic gives you the same information, at least you know they are going down the right road,” he notes. Edmunds agrees, adding that a code reader provides car owners with one more data point to help them talk with their mechanic and avoid costly or unnecessary auto repairs.

Mixed Signals
But even with the code and its meaning in hand, do-it-yourself interpretation can be a little tricky — even if you are mechanically inclined, as Dan Edmunds explains.

“My wife’s car started running poorly and there was a Check Engine light. My code reader detected a code for the Cam Angle Sensor. I thought about buying the sensor and installing it myself, but if I had, I would have wasted time and money because it turned out that the sensor was fine. Instead, mice had gotten under the hood and had chewed some of the wires leading to it.”

Occasionally, the Check Engine light comes on when nothing is wrong with the car, Mazor says. It could be a temporary problem caused by a change in humidity or other factors. In such cases, the light should go off by itself after a short time. CarMD published a list of the five most common Check Engine light codes in 2010 and estimated cost of repair. In order of frequency, they are: