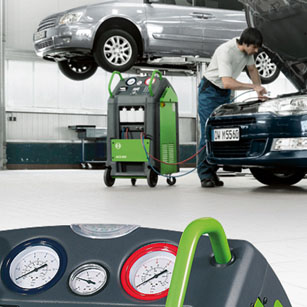 You’re stopped in traffic on a hot summers afternoon. Sweat drips from your neck all the way down your back until your shirt absorbs it, making a damp spot between you and the seat. Your legs are either stuck to the vinyl upholstery or prickled by its cheap velvet. Your hands feel like they’re about to slip off the steering wheel, and you’re thankful your eyebrows are keeping the sweat from running into your eyes. Well, mostly.

What’s missing from this picture? Automotive air conditioning. It’s become nearly universal, with 99 percent of all new cars as of summer 2010 coming equipped with it. When it’s missing, we notice.

It’s also been with us longer than you might think. Packard invented automotive AC all the way back in 1939, and in 1940 was the first car company to offer factory-installed air conditioning. Of course, this early system didn’t have a thermostat, but it was better than not having anything at all. The idea caught on, though, and by 1969, more than half of all new cars were sold with air conditioning built in. That’s not including the aftermarket AC units that could be installed during the first heat wave of the year, when the new owner regretted his penny-pinching at the dealership in January.

Eventually, it was determined that the refrigerant used for decades in automotive AC, known as R-12, CFC-12, or its brand name Freon, was damaging the ozone layer (it’s a chlorofluorocarbon). It was banned from being manufactured in the United States and an alternative, called R-134a or HFC-134a, was required for all cars manufactured after 1996. Now, any car older than that needs to be retrofitted with a new system that can use the newer, safer refrigerant.

Air conditioning has worked pretty much the same way for its entire existence: it cools and removes humidity from the air. There are three main parts to the system — the compressor, condenser, and evaporator — that achieve this, plus a few other parts to keep the system running smoothly. Let’s take a look at each.